A chronicler called Moldova a country on the way of all disasters. Kishinev is on the same way and historical storms have been raging over it for centuries and was repeatedly trampled down by the Tatar-Mongolian hordes and burnt down by the Turkish. The territory of Moldova is located on the boundary of the Eastern and the Western Europe and has been populated from the ancient time.

The first leavings of the post Paleolithic sites, discovered here by the archaeologists, refer to 35-8 thousand years BC, to 10-8 thousand years the tracks of the Chernyakhovskaya culture, treasures of the Roman coins to the IV century AD, the Slavonic settlements to the VIII-IX centuries.

The ancient Romans and wandering tribes, that used to migrate over this territory, left vestiges of their stay. The raids of the Tatar-Mongolians Golden Horde went on up to the 90-ies of the XIV century, when invaders were compelled to retreat under pressure of European peoples also out of this territory, that historically was a part of the middle-aged Moldovan state.

One can hardly find a city, that celebrated its 500-year anniversary twice, but Kishinev is the one: under the Romanians and in 1966 in the time of the Soviet power. It happened, because Kishinev was firstly mentioned in historical documents in 1436 in the official document of voivodes (a voivode is the head of the army, district or province) of Moldova Ilie and Stephan Oanchya to the logofet - the head of gospodar’s office (gospodar - the title of the king of Moldova).

According to the Soviet historiography a built-up area in the place of the contemporaneous Kishinev was mentioned in 1466 in the charter of the Moldovan gospodar Stephen the Great to his uncle, boyar Vlaicul, for the ownership of the village Kishinev around the well of Albishioara. More than a hundred years the Vlaicul’s offspring possessed these places.

Under Ottoman yoke set up in Moldova in the middle of the XVI century, constant incursions of the Turks and Crimean Tatar, increase of duties, the town development had been happening slowly and the country was in decay. Firstly being a boyar and since 1641 a monastic patrimony, Kishinev was repeatedly destroyed. The first remaining scheme of Kishinev refers to the beginning of the XIX century. It testifies about the fact that the town in the middle of the XIX century constituted the assemblage of dirty pise houses with reed roofs without firmly determined districts and streets.

The historical core of Kishinev was situated in the lower part of the city. The planned city development began in 1818.

The first topographical survey was conducted in 1813 and 1823. Using the new survey, performed in 1829-1830 by Eitner and Gleinin, Major-general P. I. Fedotov designed a project of regulating of planning of the existing part of the city and development of free lands of the 'upper city' - the first general plan of the city reconstruction.

In ancient time villages of Buiucani, Munchesti, Visterniceni, Hrusca, Vovinteni were gradually united with the town. During the Russian-Turkish wars the retreating Turkish twice set our town on fire, in 1739 and 1788. As a result of the number of Russian-Turkish wars the territory between the rivers of Dniester, Prut, and Dunai in 1812 became a part of the Russian Empire, and got the name of Bessarabia, and Kishinev, having got an official status of town in 1818 became a centre of the Bessarabian district and since 1873 the centre of the Bessarabian guberniya (province). If from 1812 till 1818 the Kishinev population had increased from 7 up to 18 thousand people, by the end of the century it had grown up to 110 thousand. However, the growth of population was happening not at the expense of the natural increase, but due to the emigration processes. Those years Kishinev was the centre point of the industrial manufacture. It had rather developed economic connections with the other areas of Russia.

The planned building of the town was begun in 1818. In 1834 the government adopted a general plan of the Kishinev development. From 1829 till 1834 wells, that provided the most part of the population with water, were improved in Kishinev. At the expense of the Town Council (Duma) the spring was arranged in the district of Mazarache Church. For a long time, the whole town was supplied with its water carried in barrels. In XIX century, by the hill, the Mazarache church is towering on, by the bank of the river of Bik, once there was a fountain, supplying the whole Kishinev with water. The ancient fountain is worth restoring (even more so, because it is a zone of rest with alleys and parks) and cleaning in order to the city-dwellers could enjoy the crystal water again.

In the past, the Kishinev dwellers, according to doctor N.A. Morosanu, who published a number of articles on this theme in mass media ("Viata Basarabei", NN 5-6, 1936), used the water from the Bik and springs, located in the town territory. The drinking water was taken from the water-pump, called "fontal" by everybody. According to the contemporaries, water was received from 40 outfalls and several wells.

In the past, the Kishinev dwellers, according to doctor N.A. Morosanu, who published a number of articles on this theme in mass media ("Viata Basarabei", NN 5-6, 1936), used the water from the Bik and springs, located in the town territory. The drinking water was taken from the water-pump, called "fontal" by everybody. According to the contemporaries, water was received from 40 outfalls and several wells. The best water in Kishinev was considered to be the one flowing by the Mazarache hill. People took it with pails and water barrels. It was the occupation of water carriers that enjoyed a number of privileges and indulgences for paying state taxes. Nevertheless, they skinned the town inhabitants alive, especially in hard time, when the barrel of water was appraised at 1 rouble. At that time, it was big money, and the price for water - inconceivably high. In 30s, the city administration started mass building of wells and water-pumps in its different parts in order to abolish the water carriers' monopoly for the drinking water. 12 wells were documented to have been built in the Cathedral square in 1837.

In 1843 the city dwellers took drinking water from three water pumps - two public ones and one private. There were 215 wells in the city territory.

The spring, named 'Burcut', located on the left bank of the Bik, was cleaned and improved in the same year. Its mineral water had healing power.

There are a lot of churches in Kishinev. Yet, only the Christmas Cathedral can pretend to be the central one due to its location. That is why the clergyman of the Cathedral, T. Borta, suggested celebrating the church holiday on 25 December (7 January on Julian calendar) in the day of the Cathedral consecration.

After the October Revolution of 1917 «Sfatul Terii» (a representative organ) began to function. It proclaimed the creation of the Moldovan Democratic Republic on 2 December. On 13 December, in accordance with the «Sfatul Terii» call, Romanian troops run by general Brosteanu entered the Bessarabia. On 27 March 1918 «Sfatul Terii» voted for the Bessarabian unification to Romania and Kishinev became a part of it. On 1 January of 1919 the Municipal Conservatoire (the Academy of Music) was created in Kishinev, in 1927 - the Faculty of Theology, in 1934 the subsidiary of the Romanian Institute of social sciences, in 1939 - municipal picture gallery. Those years the quantity of the city population was not increasing, and in June 1941 Kishinev had 110 thousand people.

On 28 June 1940 the Soviet troops came to Kishinev, and on 2 August of that year Moldavian Soviet Socialist Republic was set up, with the capital in Kishinev.

From the first hours of the Great Patriotic War, on 22 June 1941, Kishinev became a front-line city; when it was dawning Kishinev was subjected to aircraft bombardment and soon occupied by the Romanian troops. On 16 July 1941 the Romanian flag was hoisted over the dome of Cathedral. 18 August 1941 Romanian King Mikhai and Marshal Ion Antonesky examined Kishinev. For Kishinev the war finished on 24 August 1944 when the Soviet warriors entered the city. It was a result of the Yassko-Kishinevskaya operation. After World War II the city was being re-established and growing very fast. If in 1944 it only had 25 thousand inhabitants, by 1950 it had had 50 thousand.

In 1990 the institute of Mayor was re-established in the Republic. The first mayor was N. Kostin.

On 3 September the institute of President was introduced in Moldova. The first president of Moldova became Mircia Snegur. 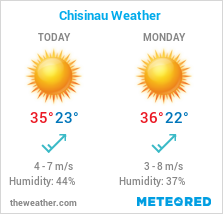